Anyways, I spent this weekend mother's helping for a family with an autistic boy, but their son would have moments where he decided he was just done with human beings and would zone out with an iPad for an hour or so. So, I ended up having a lot of conversations with his father who used to be a science fiction editor and had written an episode of Deep Space 9.

One of the things we talked about is "Where BSG went wrong". Don't worry. This is not a discussion of that. Because gods only know how long we could go on about that one. No. I brought up my point that New Caprica was highly rushed and severely underutilized as a plot arc. BSG functioned so well as a show when it dealt with the legitimate issues of the end of the world, so why didn't it deal with the legitimate issues of settling on a brand new planet or the cylon invasion of the planet. One point he brought up was, when the cylons showed up, why didn't the humans scatter? It's not like they didn't have an entire planet to utilize. Or you know, a band around the equator where it was habitable.

Now here's where you come in. Let's prove that we are smarter and more thoughtful than the BSG writers (as you guys pretty much do on a regular basis) and come up with the unanswered questions that could have and should have been explored with a longer arc. Bonus cookies for anyone who writes a drabble or a fic based on the prompt.

Example:
They're on a new planet, with new vegetation, and presumably some kind of insect life at least to assist in the reproduction of that plant life. We also saw a swampy area on the planet where Athena met up with the resistance. Bugs carry disease. Why didn't se wee the actual biological impact of the humans meeting up with a virus they had never encountered before?

Posted via Vita for iPhone. 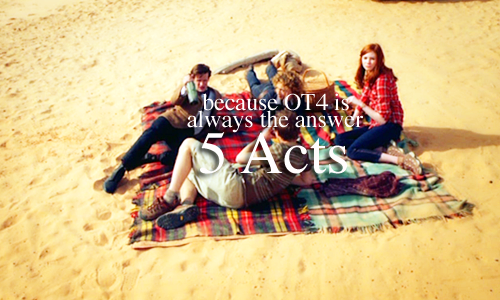 Here's how it works:
1. Post a list of your five favorite acts/kinks/themes/tropes to read about. Check out THIS LIST if you need some inspiration. At the bottom, add what fandoms/pairings you're interested in.
2. Go HERE and post a link to your list. Read other people's lists.
3.Write comment-fic (or longer pieces) based off of other people's lists. Post either the fics or a link to the fic in the person's post.
Five Acts
1. Love/Hate (arguments, breaking up and making up, exploring the ups and downs of complicated relationships)
2.  UST/Threesomes (somethings can be worked out very simply)
3. Pregnancy/babyfic (admitting to an unplanned pregnancy, uncertain parents to be, planning to try for a baby, trying not to wake a newborn baby. Happy family sexy times, angsty family sexy times.)
4. Hurt/comfort (illness recovery, rescue scenarios, fallout from psychological trauma, making up for past failings, one character is there for the other no matter what.)
5. Bondage/Imprisonment (at the mercy of another, handcuffs, neckties, restraints, whatever, one character can't do anything to stop the other, struggle, at the mercy of another, power dynamics, escape from a prison or trap, kidnapping, consensual or not)

Okay, so I cut some people from my flist. Mostly because I find that I'm not online as much anymore, and I find myself skipping over certain posts on my flist routinely. (Really, it's not you, it's me.) I feel like a bad flister to many. So, I cut a bunch of folks. If you really want me to add you back, I will, just let me know! Also if you want to BE removed from my flist, let me know.

This is something I'm sure I have talked about before, but for the life of me if I've made a post about it I can't find it. One of

I believe that Sam/Kara would have been a better pairing and overall plotline if Samuel T Anders was replaced with Samantha T Anders.

Oh Ray, you might say, you and your femslashy ways. Seriously, hear me out on this one. I will list here my main reasons and potential problems with this scenario.

Let's count the queer characters guys!! Cain. Evil and dead. Gina. Cylon and dead. Gaeta. Mutinous and dead. Hoshi. Who? Also apparently there was some stuff going down between D'Anna and Caprica Six but was only expressed via Gaius Baltar.

The world of BSG is different from our own in the way they handle gender. At least that was the ideal behind the world--a world that has no gender roles, people are clearly gendered but it does not define their role in life or how they are supposed to act. Granted, occasionally the writers would frak this one up, but what can I say? The writers live, unfortunately, in our world. Our world has a system and internalized sexism that a lot of people aren't even aware of. The fact that they went for it at all is brilliant and has my undying appreciation.

This is one of the things that is brilliant about the punch between Kara and Lee in KLG, she punches him and he punches back, but it has no connotation of "Oh my god! He hit a girl! That's wrong!" I had a friend who didn't really watch the show go "It's okay because Starbuck is one of the guys." To which, all my BSG inclined friends roared a simultaneous "No!" She's not one of the guys. That implies a male standard for which women need to reach. She's his equal and he is hers.

Yet with the exception of two gay relationships in side stories, there was no queer. While the show Caprica is handling this better in my opinion, BSG really dropped the ball. Automatically, a Kara/Samantha plot line fixes the fact that within the main part of the show there are no gay relationships.

(I shall not get into how BSG's perception of gender plays into trans themes because I do not feel as though I am qualified to talk about this in depth. One gripe at a time please.)

To whomever is writing for me <3